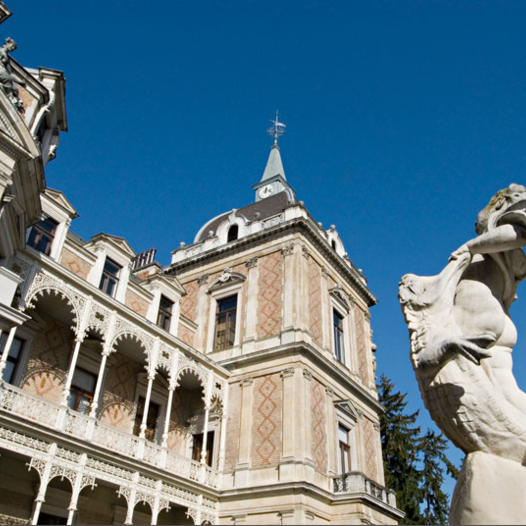 time for a tour of Hermes villa and a stroll in the Leinzer Tiergarten. The tour is in English, something that the Museum only does by special request, otherwise it’s in German. So if you wanted to take a look at this lovely Villa for some time, here is your chance.

Situated in the middle of the former imperial hunting grounds, now Lainzer Tiergarten, the  Hermes Villa a.k.a “Palace of Dreams” used to be the personal villa of  Empress Elisabeth. Emperor Francis Joseph gave it to her in the hope of persuading his wife – a keen traveller – to spend more time in Vienna.

The Villa was built over a period of five years by the famous Ringstrasse architect Carl von Hasenauer in a style used by many romantic country houses the high-society at that time. The name of the Villa comes from the statue of “Hermes the Guardian” standing in the garden.

The Villa houses an impressive exhibition on the history of the house arranged on the first floor. Displayed are: photographs, plans and documents, and even parts of the original furnishings as well as many personal items belonging to the emperor and empress which convey the imperial lifestyle away from official court etiquette.

The empress’s bedroom is sensational. The huge royal bed is from the time of Maria Theresa, the murals depict motifs from Shakespeare’s “A Midsummer Night’s Dream” after designs by Hans Makart.

The house also has a gym furnished in bright colours because Sisi was very body-conscious and performed her physical exercises with great regularity.

11:30 Meeting at Lainzer Tor (please be on time, walking to the Villa takes some time)

13:00 Have coffee and cake at the coffee shop of the villa

14:00 Walk through Lainzer Tiergarten to the U4 Wien Hütteldorf Station.

Cancellations can be made until 48 hours in advance.